The Sandlot is a 1993 comedy sports film directed, written and narrated by David M. Evans about a group of young baseball players during the summer of 1962.

In a small American town in the early 1960s, Scotty Smalls is the new boy in the neighborhood, seeking desperately to fit in. One day, he visits a sandlot where some of the local kids play baseball everyday. Seeing as how they are only one player short of nine team members, Smalls get enough courage to take up a space in the outfield. Smalls however, can't play baseball; a descending fly ball bounces off his glove when he tries to catch it, causing the other boys expet Benny "the Jet" Rodriguez, the team's leader, to burst out laughing. and even more so when he fails to throw the ball back. Smalls then leaves the sandlot humiliated.

With some encouragment from his mom, Smalls asks his stepdad Bill to help him pracice throwing and catching, Bill, after a while agrees to teach Smalls at his mom's insistence. He fails to catch and throw until he get's a black eye from catching a throw with the glove next to his face.

Accepting an invitation to play by Benny, Smalls meets the rest of the team: "Ham", "Squints", "Yeah-Yeah", Kenny, Bertram, and brothers Timmy and Tommy. Although they doubt his potential as the ninth member of the team, and with some coaching from Benny, he is able to successfully catch and throw the ball, earning respect from the others.

During one game, Ham hits a ball over the fence behind the sandlot, angering the other players. Smalls attempts to retrieve it, but is stopped by the team, who are afraid of " The Beast" that lurks behind the fence. Later that night in the team's treehouse, Squints relates the neighborhood legend of the Beast: about 20 years ago, junkyard owner Mr. Mertle bought a guard dog to keep thieves from stealing from the junkyard. After he fed it very amounts of raw meat, it grew large and savage, and supposedly killed any thieves that broke in.  The police got phone calls reporting the hundreds of missing thieves, and Squints's grandfather (who was police chief at the time) had Mr. Mertle chain up the beast and pur it under his house. When he asked how long the dog was to remain "chained up like a slave". Mr. Mertle was told "forever". It has been rumored that one kid went over the fence and the Beast ate him. Altough Scotty believes the team is trying to scare him, he looks out the window of the tree house into the Beast's yards and gets a shocked reaction, only stating that he saw hundreds of baseballs and no human remains.

When it becomes to hot outside to play, the team decides to go swim at the public pool, and Benny reluctantly agrees. While they are swimming and gawking at girls, Squints fakes drowning in order to kiss his love interest, the lifeguard Wendy Peffercorn, while she is giving him mouth-to-mouth resuscitation. According to Smalls' narration, although she was angered by it, and the boys were banned from the pool after that, she would look down from her tower whenever they walked by, and smile at Squints.

Later on, the sandlot team is challenged by another team in the neighborhood, and they come out victorious. The team goes out to celebrate at a carnival, where they become sick after chewing on tobacco brought by Bertram.

One day Benny hit the boys' last ball so hard, he literally hit the hide off of it. Smalls saves the day by borrowing an autographed ball from his stepfather's trophy room; only to hit it into the Beast's backyard, Smalls learns the ball was special" it was signed by Babe Ruth, who he had never heard of, shocking the team. To buy some time to get the ball back, Smalls puts a  replacement ball (with the signature faked by Benny) back into the trophy room. The boys attempts to recover the ball (with a wooden stick, a pot on a metal bar, a vacuum cleaner, lowering Yeah-Yeah down with a harness, and motorized Erector Set catapult) ultimately end in failure.

After being visited in dream by Babe Ruth, who gives him inspiring advice, Benny climbs the fence to retrieve the ball and confronts the Beast: an English Mastiff (whose monstrous appearance was only imagined by the boys) named "Hercules". He snatches the ball and is pursued in lengthy chase across town by Hercules, which ends back at the sandlot after the back fence falls on the dog. After Smalls and Benny rescue him, the boys are shown the collection of all the lost balls that went over the fence. Knocking on the door, the boys finally meet Mr. Mertle, who is nothing like in the story told by Squints, but a former baseball player who played with Babe Ruth, who went blind after getting hit in the head with a ball. Along with the Babe Ruth ball, Smalls receives a trophy ball autographed by the entire Murderer's Row, who then gives it to Bill to make up for taking the Babe Ruth ball out of the trophy room. They warm up to each other, and Smalls is able to start calling Bill "dad".

The sandlot boys enjoy the rest of the summer and the next few years. Over the next three decades, Hercules lived (in dog years) for almost 2 centuries and passed away after. The boys grow up and go into different careers. After Yeah-Yeah left the army, he created bungee jumping; Bertram disappeared after felling in love with the 60's; Timmy and Tommy became building designers; Squints married and started a family with Wendy Peffercorn, running a store in their hometown; Ham became a professional wrestler, "There Great Hambino"; DeNunez owns a business as well as running a little league called "The Heaters". Benny and Smalls still remain close, as Benny becomes a famous MLB player for the Los Angeles Dodgers while Smalls becomes a sports announcer following Benny's games. Near the end of one of his games, Benny amazingly steals home, and gives a thumbes-up to Smalls, who is watching from a commentator's booth. Smalls replies likewise before glancing back at a picture of the sandlot team hanging on his wall. 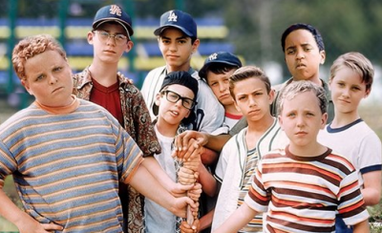 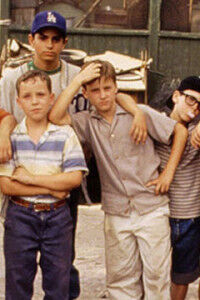 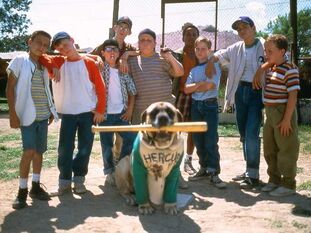 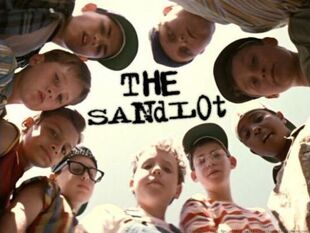