The Sandlot Wiki
Register
Don't have an account?
Sign In
Advertisement
in: Characters, The Sandlot: Heading Home Characters, Baseball Players,
and 3 more

Tommy "Santa" Santorelli  Born In 1963 is a selfish, cocky, arrogant, and conceited, when he's young and older. He's became like this when his mother (Sara Santorelli) passed away of cancer and he misses her, so that was how he became this way. When he goes back in time, he is shown to be nice, heartfull, loving, less selfish, and not so rude or arrogant. He finds out that friendship is better than glory, and he can have both. So when he goes back to his time, he's none of the things he was before he went back in time. He is Benny's best player on the Dodgers, and has all of his friends from the past he when to, there for him.

In 2007 Tommy "Santa" Santorelli is one of the best baseball player of the time. He is one his last season, before he's retiring. But he has been on so many teams that he didn't really have that much loyalty to like the Dodgers, Yankees, and more, then he went back to the Dodgers. Even though he's a good player, the Dodgers have been having a bad season, in there whole history. He is next seen talking to reporters about how he feels about what he thinks when wrong with the game. He tells them that if his team wants to play like losers, then he can't do anything about it. When one of the reporters ask him if he has any regrets, he tells them he has none. Then the reporter asked him about a book "Tell All", that was written by his ex fiance Judy, then he leaves mad, not answering any more questions.

Around fourth of July, Tommy goes to practice with his team, while some guys are putting up some fireworks for the Fourth of July fireworks next week. One of them is watching Tommy practice, and not do his job, and doesn't hear the other guy tell him what to do. When Tommy is parcting, he is getting his other team mates made at him for telling them what he thinks there baseball skills. The guy not paying attention to his job, doesn't hear the other guy telling him next week when he tells him to light the fireworks then, light them. The guy thinks he told him to light the fireworks now, so he did. When he light them, the pitcher throw Tommy the ball, Tommy couldn't really see, it so it hit him in the head. When the ball hits Tommy in the head, it knocked him unconscious, and it takes him back to 1976.

He wakes up in 1976, still almost unconscious,and he find himself in the Sandlot with all of the kids who play there now. They ask him who is the best baseball player ever, to see if he's okay. Tommy tells them he is, they all tell him that it was Ruth Babe Ruth. He tells him that is Santa ( he calls himself that because he says that it was a gift to see him play), they all wonder about him now, then Tommy falls unconscious again. Tommy wakes one more time almost getting mouth to mouth by the sheriff of the town. He asked them why is everyone calling him kid, who jacked his BlackBerry, and he was calling his agent. They wall wonder what he's talking about. Then he looks at the sheriff's sunglasses and he sees that he's a little kid again. Then with knowing all of this he go unconscious again.

When Tommy wakes up he's in his old home, and his mother was too. 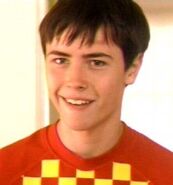 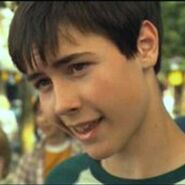 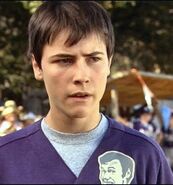